Into the Valley of the Little Flags 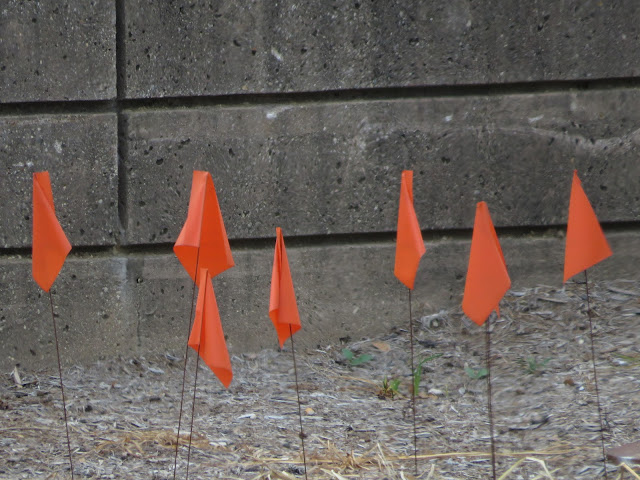 Surveyors were out in droves this past summer, planting little markers to indicate the locations of telecommunication lines. These were at an intersection near downtown, a profusion of little orange flags on wires, looking less like markers for vital cable lines than some sort of haphazard planting of flowers. 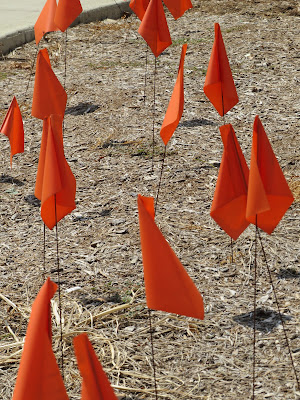 And A Happy Friendsgiving to You All - Dew on the Alligator 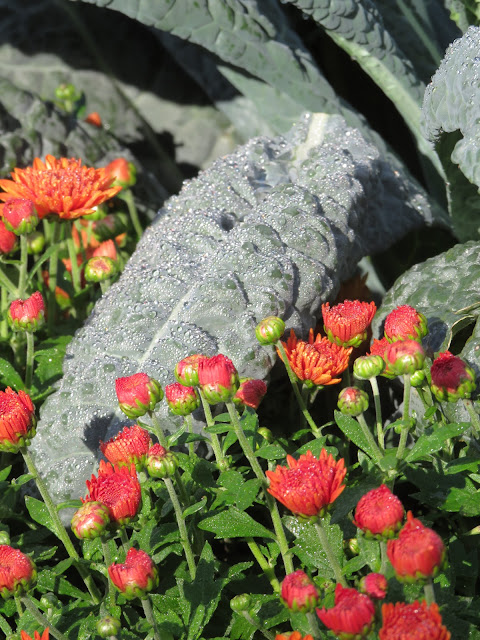 A local landscaping company has contracts to supply and tend numerous planters all over the city. It always surprises me the combinations the designers put into the containers.

One year, I saw huge pots filled with various shades of green, while on this morning the plants were of contrasting colors, as well as lumpy set against pretty. Their appearance was given the added glamor of being misted in sparkling dew.

Let's See If I Can Make This Work 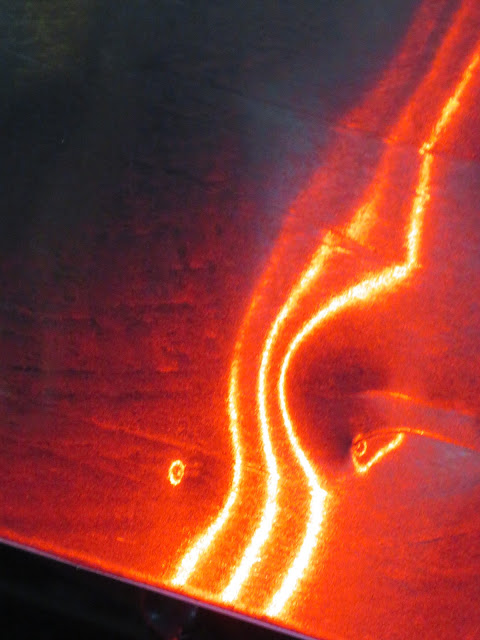 One morning last summer I was aboard the bus, on my way downtown. I happened to look across the aisle where my eye was caught by the unique reflection, the safety light from another passenger's electric wheelchair, reflected in the stainless steel baseboard of the bus interior.

Of course, I took a picture.

Not long after I took this photo, the hard drive on my PC took a death dive. It was only eighteen months old. I was good to it, I don't spend time on weird websites, so I don't know why it went kaput. At about the same time, my house phone died and my cellphone was taken over by viruses, making it unusable.

Slowly, I've been making my way back into my on-line world: I bought a new house phone so I could order a new cellphone. Its delivery was delayed a month due to the back-ups on the shipping docks. I imagined its slim black rectangle, swathed in pink bubblewrap inside a small brown box, inside a cardboard carton, stacked in a shipping crate shoved inside (possibly) a MAERSK container, which was stacked, among thousands of others on an immense container ship.

Somehow, it all works. Until it doesn't. We've all gotten so used to having anything we want dropped into our hands, that we don't take the time to appreciate the work it takes for us to have it. Whether it be a lacy bra, a pair of sneakers, a new car - or a life-saving medicine, somehow or another it's come to us through a series of workers we'll never see, but who deserve our thanks. 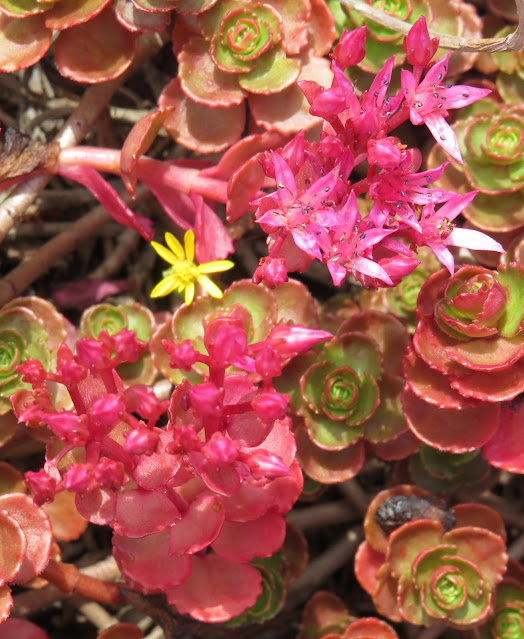 These little plants form a part of the landscaping outside University Hospital on the IUPUI campus. 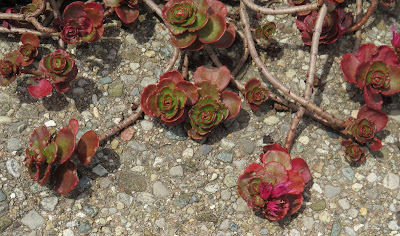 I don't know what they are called, but I think they are beautiful. There are even little bees, just the right size for the tiny flowers, working what must appear to them as a vast expanse of pink and green. 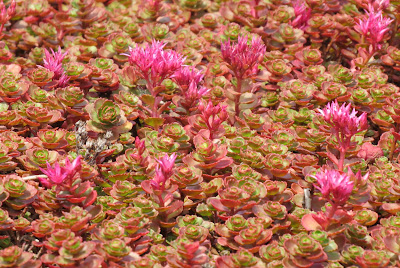 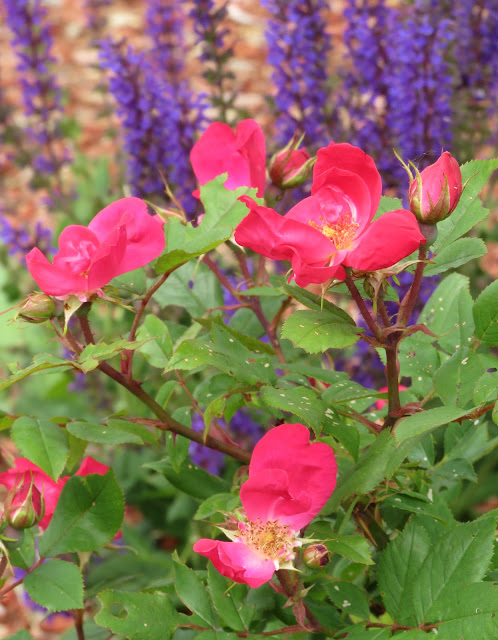 It's not the greatest picture. Most of the roses have had their petals blown away. The shapes and composition are not striking. But, daggonit! There is bright and happy color, something I have missed. The bright pink, purple, and green basked proudly in spring sun.
During this long period of self-isolation, it seemed that the only flowers to be found were at the gardens of the club where I swam during the summer mornings, or at the museum where I sometimes would go for a walk. These caught my eye as I walked from my apartment to the bus stop, just a few feet outside my door.
Posted by Speedway at 2:39 AM 1 comment:

Too Long in the Great Lockdown: 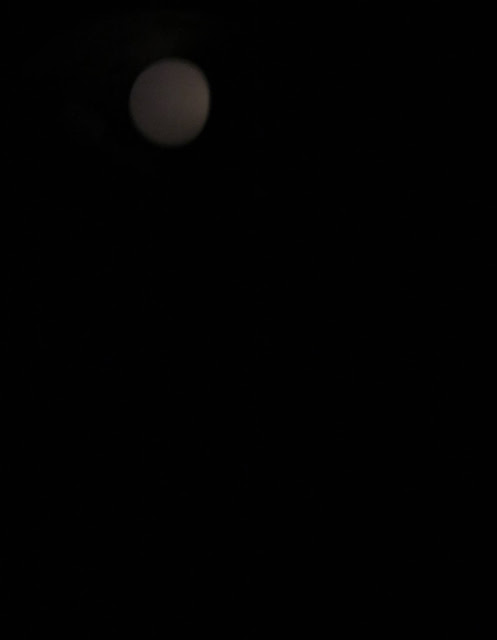 One night, just after I'd turned off the kitchen light and was on my way to bed, I looked up and thought, "Oh, there's nearly a full moon tonight." Except ... it was the fading glow of the LED bulb of the kitchen's ceiling light.

The bulb is slow to shut itself down, so I was able to take a picture for you, to show what it looks like when one's imagination has brought the moonlight inside one's apartment, just six inches below the ceiling.

In A Quiet Place 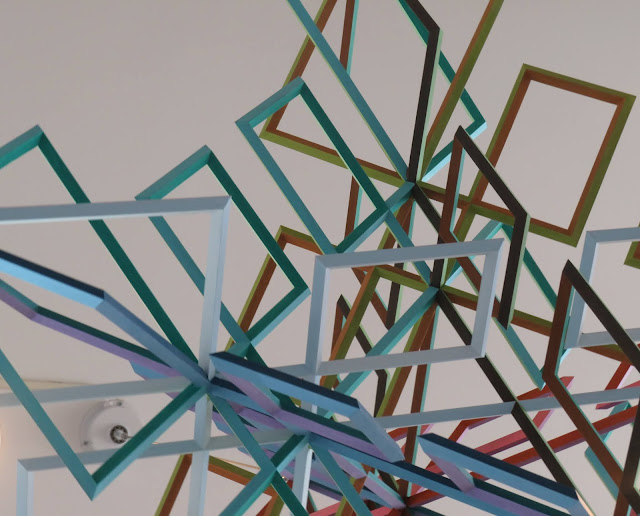 This sculpture by Morton C. Bradley Jr., is hanging in a quiet alcove in the IUPUI Campus Center in Indianapolis. Called Ensign, it was created in 1996 from square brass tubing, silver solder, and paint. The large piece, fabricated for Bradley by Harold Robinson, contains six planes aligned so that they seem to flip over onto one another as they turn overhead. 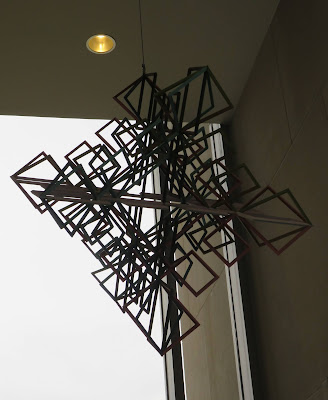 My First Book ... and Likely to Be My Last at the Rate I'm Going

Steamboats: Icons of America's Rivers, published by Shire Books and distributed by Random House, is available for sale from Amazon(dot)com. The book is an overview of the history of the steamboats that plied the Ohio and Mississippi River basins. Readers who never thought they might be interested in the topic will find some aspect of the boats' histories that has influenced contemporary life. An extensive bibliography as been included for further reading, and there are a lot of beautiful, interesting pictures.

All contents and images copyright protected and registered by Sara Wright, 2010-2020. It is unlawful to repost, copy, or publish images from this website.

Speedway
Speedway, Indiana, United States
Sort of retired, from a job I didn't care for, to work at things I do enjoy: painting, drawing, photography and, as it turns out, writing.